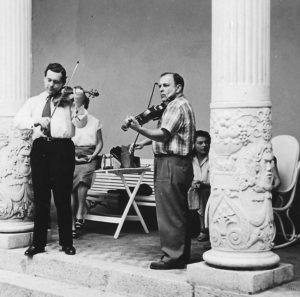 Arthur Grumiaux and Joseph Fuchs in Prades in 1953

In 1953, Eugene Istomin assumed the artistic direction of the Prades Festival together with Casals. He had to hire new violinists in the absence of those who had participated in the first three festivals (Stern, Szigeti and Schneider). He chose Arthur Grumiaux, the heir to Ysaÿe and the Franco-Belgian school, and Joseph Fuchs with whom he had recently given some concerts (notably playing Franck’s Sonata).

Joseph Fuchs came with his sister Lillian, a renowned violist, to play Mozart’s Sinfonia Concertante K. 364, and he joined Istomin and Casals to play and record two Beethoven Trios (Op. 1 No. 1 and Op. 70 No. 1), thus completing the series which Columbia had begun with Schneider in 1951. Casals was satisfied enough for Fuchs to be invited again and share the violin parts of the complete chamber music by Beethoven with Szymon Goldberg in the 1954 Festival. The four sonatas which Istomin performed with Fuchs are remarkable for their stunning energy and virtuosity in the fast movements. 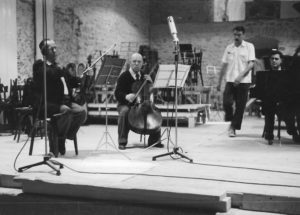 Apart from the unforgettable musical moments of these festivals, Joseph Fuchs cherished two special memories in particular. He had been amazed to discover Arthur Grumiaux’s virtuosity at the piano. Fuchs immediately responded by picking up his violin and playing a Beethoven sonata with him in the presence of the orchestra musicians, who were rendered speechless! And he had been flabbergasted by Istomin’s familiarity with Casals, daringly commenting to him after a very successful rehearsal: “Well done! It’s almost as good as Piatigorsky! ”