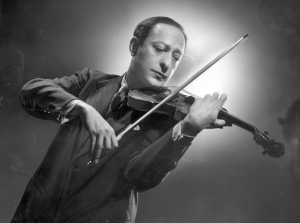 Heifetz’s virtuosity is not only for brilliance. It is not only perfection, it goes beyond. Everything he touches turns out to be Heifetz. He is the super superstar of the violin. I wanted to play the piano the way Heifetz played the violin.

Heifetz’s art is still greater in small works than in the big ones (like Beethoven Concerto). He is miraculous in Vieuxtemps or Wieniawski concertos, in the Introduction and Rondo Capriccioso by Saint-Saëns, in Tchaikovsky, in all the Russian repertoire. With other violinists, it may seem superficial. Not with him, you can fall to your knees! 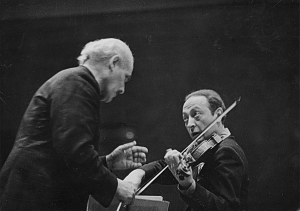 As for the biggest masterworks, the Beethovens, the Mozarts, in which he had been challenged at the time, if today you listen to his recordings, you cannot but find them extraordinary! Listen to the second movement of Brahms Concerto under Koussevitsky!

In proportional terms, relatively speaking, it is as mysterious, as miraculous, as Mozart. As regards performance, he is a genius, a prodigal son; he is the greatest instrumental miracle I have ever known. Greater than any pianist! He had an enormous influence on me. It was almost an obsession for me during a certain period. It was as inspiring for me as the singers.

Nevertheless, Heifetz and I cannot be more different. No introspection in him. He was not at all an intellectual, he was very simple, very selfish, quite unlikeable… But the intensity of his playing was that of a big cat, powerful, dangerous, and amazingly beautiful.”

(Interview with Bernard Meillat in 1987). 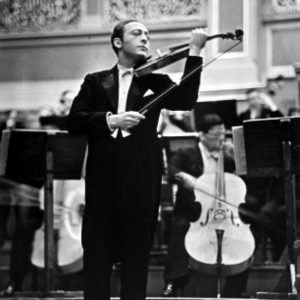 Experiencing Casals’ musical ideals in 1950 caused Istomin to question his reference points. How could he reconcile his fascination for the virtuosity and the perfection, with Toscanini and Heifetz as paragons, and his identification with Casals’ humanism? Finally, Istomin came to think that both positions were not so incompatible and that he could take up the challenge to make them co-exist within him… Casals himself did not feel this was impossible. Asked by Corredor which conductors he admired, Casals mentioned three as different as Furtwängler, Toscanini and Stokowski! In his Conversations with Corredor, Casals remembered that he met Heifetz for the first time in Kiev « when he was a little boy of ten or twelve with curly hair ». He considered Heifetz to be « an unsurpassable instrumentalist, whose expression might sometimes seem excessive, were it not for the harmony, which never fails and gives his playing an impressive brio.”

Istomin was very curious to see how Heifetz and Casals would get along musically. He tried to bring them together in Prades when he became the artistic director of the Festival in 1953. He had made Casals listen to Heifetz’s recording of the Symphonie Espagnole by Lalo. Casals was very enthusiastic. They sent a postcard to Heifetz inviting him. Alexander Schneider had already tried in 1950, but Heifetz did not deign to answer, letting his manager insinuate that the fee was not acceptable. This time, Heifetz answered, saying that he had other plans for the summer and asking Istomin to give his regards to Casals. 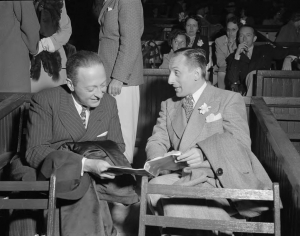 Istomin shared his admiration for Heifetz with many pianist friends, like Kapell, Fleisher, Lipkin and Lateiner. Kapell, who was also an exclusive RCA artist, recorded the Brahms Third Violin Sonata with Heifetz in 1950. Heifetz had insisted on closing the lid of the piano. Istomin deplored the fact that the piano seemed to be in the next room, as if Kapell were a scarcely- tolerated accompanist!

How was such a misunderstanding conceivable from a musician like Heifetz? In his autobiography, My Nine Lives, Fleisher recounts the human and musical problems he faced during his collaboration with Heifetz. One day, he and Piatigorsky were rehearsing at Heifetz ‘s. When they stopped for lunch, Heifetz ate alone, without inviting them or offering anything to his colleagues. In the afternoon, Heifetz decided to cut the finale of Schubert’s Trio in E flat, on the grounds that there was nothing worse than boring his listeners. Fleisher vehemently protested, and was never invited again.

As for Istomin, he played a few times privately with Heifetz, but soon realized that it was better to stay away from the myth in order to keep it intact. He continued listening to his recordings, and recalling the great performances of Heifetz which he had heard, in particular a fabulous Sibelius Concerto with the Philadelphia Orchestra in the early 40s.

A portrait of Jascha Heifetz….